Baedeker’s first trip to the Rhine as an artistic excursus

After Karl Baedeker took over Franz Friedrich Röhling’s publishing house, which had gone bankrupt, he had the latter’s first Rhine travel guide revised and published as ‘Rheinreise von Mainz bis Cöln, Handbuch für Schnellreisende’ in 1832. The publication was an expression of the emerging Rhine Romanticism. This first Rhine travel guide by Baedeker is the starting point of this exhibition.

The exhibition – an art project by Ingo Bracke and Stephan Kaluza

Stephan Kaluza hiked the entire length of the Rhine from the source to the mouth 1,620 kilometres for eight months. He photographed its entire left bank from a frontal perspective: Every minute, from the right side of the Rhine, he took a picture of the river bank on the other side. In this way, a complete photographic record of the whole riverbank was created minute by minute – material that is spread out in the exhibition in a summarised, documentary manner.

Ingo Bracke travelled by train from Mainz to Koblenz for the exhibition. He created a collage from the film material of this journey, which lasted only about an hour. Random moments, image disturbances, but also longer passages of topography, ambient noises, as well as the rhythmic rattling of the wheels on the rails are mixed with excerpts from ‘Loreley’ by Fredrik Pacius (opera from 1887). He also incorporates the natural phenomenon, the sevenfold echo, into the staging and fills the space with sounds and light.

The central theme of his light installations is the Loreley. Since 2008, Ingo Bracke has been working on large projections in which he transforms the striking rock into a large-scale sculpture. Through the light, the materiality of the rock experiences a dematerialisation and it becomes weightless, transparent, floating, as if shining from within.

A myth is broken

Stephan Kaluza has achieved the compression of space and time by documenting the geographical area. Monumental industrial plants, monotonous quay walls or vegetation whose biodiversity has been disturbed are photographed just as matter-of-factly and soberly as lovely vineyards and tourist-folkloristic topographies. In this way, the mythological-historical charge present in the public mind is being overwritten and erased.

Ingo Bracke has conceived the lighting direction for the exhibition as a choreography that expands into associations and offers a multi-perspective view of the phenomenon that is the Rhine Valley. He juxtaposes set pieces, such as Loreley souvenirs or toys, with the marketing tool that has fossilised into a cliché and so creates an open resonance space. He references the idea of showcases and dioramas, which played a major role in the perception of nature, especially in the early 19th century. The visitor looks through small openings and is drawn into the world of a Wunderkammer. In the changing light, the appearance of the artworks transmutes continuously. Visitors have the opportunity to approach the myth of the Rhine associatively. In this process, the Loreley and its surroundings become a projection surface – a conundrum of the imagination. 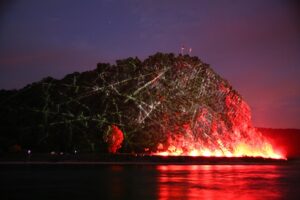 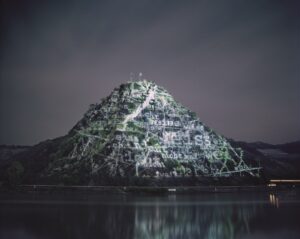