The Light objects are characterized by a strict geometric interpretation, subject to minimalism and physical change in which the breaking of light occurs, since on the border between the media, by definition, the latter changes its direction. The light beam is thus dispersed when it enters or exits the glass. The projection rays are tied to the illumination coming from the LED strips laid at the bottom of the glass. The unified light in white, yellow, green or red colour is most likely subjected to the emotional interpretation. The object consists of differently shaped acrylic glass plates arranged in sequence one after the other. This creates a model-like appearance in which level oscillations and inclines vary. The whole becomes a vibrant spatial play of falls and ascents and a parallel of the so – called contour lines – isolines, which connect points with the same altitude. The lines intersect the whole surface from edge to edge, at different angles, as though they are piercing it and thus also sharing it. The mesh patterns emerging in the combination of structural lines intertwine in an infinite unfinished variation, which is always limited at least within the surface on which it occurs. The object requires interaction with the spectator. His or her perceiving or accepting the whole takes place by changing the viewing angle from which he or she observes it. The light optical installation influences not only our spatial perception, but also the very atmosphere it conveys and with which it stimulates a state of excitement or relaxation, relating to the colourful light itself. – Melita Ažman 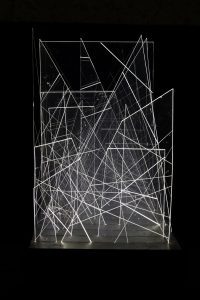