The artworks of László Zsolt Bordos are dealing with the power of light and shadow to modulate space. The artworks are a mix of light sculptures and object mapping. Today, it is possible to set up complex projections that make it difficult for viewers to perceive the boundary between real and virtual phenomena. Projections always have a tangible, physical component (an object or a building), onto which the virtual content carried by light is projected. During the creative process, the artist builds an exact virtual replica of the physical world and uses it to produce the creative layer of his work. The projection of the virtual 3D animation onto the real 3D scene, and the interplay that results from the combination of the two components, results in novel, often perplexing visual experiences. “Viewers are unable to interpret their visual impressions using their accustomed methods; they are abandoned by their senses (because the projected image modifies the surface it is projected onto). The projection derails the viewers’ customary schemes of perception and observation and urges them to create a new process of interpretation.” 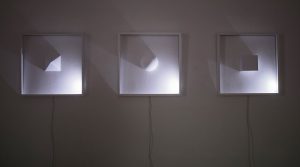