The LIT Lighting Design Awards (Los Angeles, CA/USA) was created five years ago to recognize the efforts of talented international lighting product designers and lighting implementers. “We have received a collection of incredible works with over 500 applications from 33 countries, making this program a global reference in the lighting industry” said Astrid Hébert, Program Director. “At the LIT Design Awards, we strive to support and promote not only inspired projects and innovation by professional designers but also fresh and stimulating work by emerging designers and students. This program will continue to define the future of excellence in the lighting industry.” 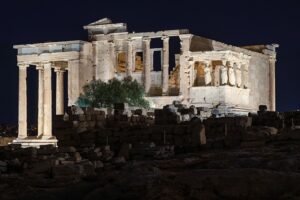 Company Eleftheria Deko & Associates
LIGHTING DESIGN OF THE YEAR > Acropolis of Athens and Monuments
Even if beauty cannot save the world, it can make it better.

After a public competition, the office of Eleftheria Deko & Associates in Athens was entrusted with a new lighting design for the Acropolis: „Our design approach was to highlight the beauty of the architecture, the timelessness of sculptures, the whiteness of the Pendelikon marble in contrast to the robustness of the Sacred rock, and the heroism of the fortification walls. We achieved the differentiation by the use of different focusing angles, differentiation of colour temperatures, and of light intensity. Lastly, our lighting vision was to make the site look outstanding at night from multiple directions both up close and from afar, and bring new life into the monuments of the Acropolis. These illuminations breathe new life into the marbles on the Acropolis. But it’s not just about aesthetics: the project is also a major upgrade of the existing infrastructure, bringing the electric power system and automated lighting control systems right up to date. It highlights the fortification walls, the Acropolis rock as a whole, and the volumes and geometries of each monument from every possible viewpoint. The marbles – now whiter than ever before – reflect every facet, every geometric shape, and every natural material in order to accentuate each monument’s decorative reliefs.“ Eleftheria Deko, Lighting Designer. All electrical switchboards have been changed, and the existing HID lights replaced with 609 cutting-edge, high colour fidelity LED lighting fixtures (that’s 40% fewer than before) as part of the technical upgrade, with a view to the new installation running without issue for over twenty years. The new lighting fixtures have minimal maintenance costs, and the newly installed system delivers energy savings of more than 65%. Light pollution has also been reduced through improved target alignment with the monuments. „Democracy as truth, human rights as values – these are things that ought to be lit symbolically. Today, more than ever, we as citizens need to see the world of the Parthenon anew – brighter, clearer, and more reassuring than ever. In these dark times, faced with a pandemic that threatens to close us in, light seems to be the most powerful symbol of all.“ Anthony S. Papadimitriou, President of the Onassis Foundation, stated at the opening. 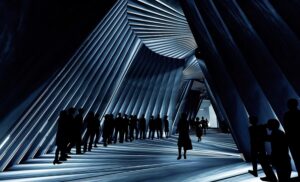 Congrui Gao’s lighting concept transforms a studio in a theatre into a large hall for fashion shows. The staged presentation of clothes is no longer performed on a catwalk, but all environments are dissolved into an immersive situation through different dimensions on five lighting levels: “The interior of the performance space is composed of a single strip-shaped LED screen, and the audience will stand along the arcs edges to experience a 360-degree immersive experience. Videos on the screen will actively respond to the fashion clothing, creating a sense of mystery, structuralism, and powerful visual impact. The relationship between the fashion model and the audience will continue to change, instead of maintaining a fixed relationship between the stage and the audience.“ Crashing waves, churning clouds, swarming crows and bright red lava will reflect from the floor – the whole scenario of the fashion show is not a static presentation but a dynamic interactive experience. 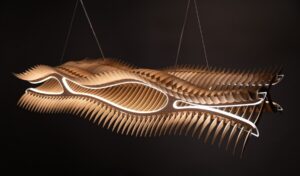 Charles Prograce’s chandelier is a tribute to Tomopteris, an almost transparent annelid worm of the deep sea. Tomopteris is a tiny animal in the millimetre range of the genus planktonic multiborster and capable of bioluminescence in an unusual yellow light. Tomopteris floats freely in the sea without any movement of its own and is driven by water currents. But the graceful Tomopteris can flicker its parapodia starting from the central body like lateral oars and elegantly control its movements. The Opteris luminaire fascinates with its resemblance to Tomopteris and the appearance of a graceful swinging movement in the air: „The fixture is composed of two parallel frames which are interwoven with 104 unique cherry wood fins which interlock on the frames. The frames exude light inward with LED lights which illuminates both the fixture and its surroundings. The design offers a completely asymmetrical and dynamic experience from all angles.“ 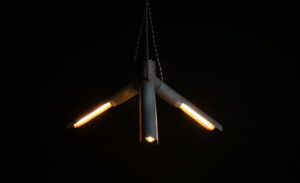 Trinity is a chandelier designed to celebrate groupings of three in both form and material. Transitions between the central concrete hub, the brushed aluminium branches, & the light within those branches are seamless; and when lit the light within each branch becomes a material in its own right as it fills in the negative space. To produce Trinity’s concrete hub, Jay developed a 3d Printable concrete mould which increased re-usability, enabled highly accurate dimensioning, and allowed mounting hardware to be cast directly into the part all while decreasing cost & machining time. „My two goals in the completion of this project were, firstly, to explore the material properties of aluminium and concrete through my design & to create a functional lamp that could be used in a home. Secondly, I aimed to distil what makes light ‘beautiful’ into criteria that would inform the final design.“ The light temperature is warm to create pleasant emotions and soft moods in the room. Light needs darkness to fully shine. Part of the beauty of light is how in motion it is at all times. A lamp that celebrates the beauty of light should celebrate its motion.

Created in 2002 at the initiative of the City of Lyon (France), today, LUCI is a non-profit organisation bringing together over 70-member towns and cities worldwide that use light as a tool for social, cultural and economic development. It also includes over 50 associated members from the lighting industry, design agencies and research institutes. Through the organisation of international events and conferences, and by piloting lighting projects and research initiatives, LUCI helps cities harness the potential of light to create sustainable and people-focused urban spaces.

With a career of over 50 years in lighting, Tony Lawrence has been working since April 1969 at Concord Lighting part of the Sylvania Lighting group. He has been designing products with strong credentials in Museums, Galleries, Office / Education and Luxury Retail. He held advisory positions at St Martins School of Art in London and at the University of Sussex.

Craig A. Bernecker’s lighting career now spans nearly four decades. He plays a significant role in the development of two highly regarded lighting education programs, one at Penn State University and one at Parsons School of Design, The New School.