The stars are not visible to the naked eye at the presence of the sun; The optical telescopes capture the radio frequencies of the waves and the electromagnetic spectrum of the universe can then be observed. For this event, we open the doors to science, and present works where scientific and technological research are the key words of this exploration ….

Interference is the combination of two waves likely to interact. This phenomenon often appears in optics with light waves, but it is also obtained with electromagnetic waves of other wavelengths, or with other types of waves such as sound waves. 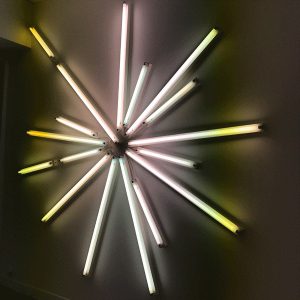 Neon Pulsar by Rémi Tamburini: These lines of neon coming from the same origin are a re-interpretation of the pulsar star written on the pioneer plate. “The Pioneer plaque is a plaque on which a pictorial message of mankind is engraved: a man and a woman depicted naked, and several symbols providing information on the origin of the probes. Position of the earth and allows to locate the solar system in the galaxy.” 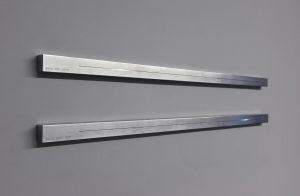 “Étalon Lumière” by Félicie D’Estienne D’Orves: The light standard series reintroduces the idea of ​​cosmic time relative to natural rhythms as a reference system. Each stallion corresponds to an object of the solar system and follows the time that the light puts to reach the Earth for each one of them. Let ~ 8 minutes for the Sun, 2 to 15 minutes for Venus, 3 to 22 minutes for Mars, 4 hours to 4 hours 30 for Neptune …

“Post-Digital Mirror” by Pascal Dombis: “… The new technologies in their artistic use create the fractal, the rhizome and the movement of and in the image. We have thus passed from the facets of a real into an abyss proper to mirrors, to an “epidermis” laminated with images. A panopticism of the interface and the artefact, where the curved topology can arise from an apparently geometrically ordered epidermis, in a minimalist baroque made of a structural fluidity and infinite visual paths. Between Alice crossing the mirrors and Icarus sucked by the infinity of the sky and the paths, the monochrome of modernism suddenly reappears in this room of multiple superimposed digital monochromes to recreate “a post-digital mirror” luminous, emptied of all flesh. But in this new “folly of seeing” distance determines access to an indetermination without frontiers, a fourth dimension that opens up an aesthetic of ephemeral and stratified time …

Extract from “A new regime of images” by Christine Buci-Glucksman »