Immersed in Light: Studio Drift at the Mint

The work of Dutch artist collective Studio Drift is based on a dialogue between opposites that explores the relationship between nature, technology and man. The upcoming exhibition “Immersed in Light: Studio Drift at the Mint” will be marked by breathtaking installations that translate data into poetic, contemplative experiences. The works occupy a completely unique place between disciplines such as tech art, performance and bio-design. Lonneke Gordijn (*1980, Alkmaar/NL) and Ralph Nauta (*1978, Swindon/UK) founded their studio in Amsterdam in 2007 and began working in product and furniture design, developing into ever larger, often site-specific and mobile installations. Since then the studio has grown to more than 20 people, bringing the studio’s work to life through continuous collaboration with artists, technologists, computer programmers, scientists, engineers and university research facilities.

Their ideas regularly anticipate technological possibilities. Data and algorithms often originate from natural phenomena. Gordijn says Studio Drift sees itself more as a technical start-up than as a traditional art practice, as the collective creates installations and interactive performance sculptures by experimenting, developing and taking risks. 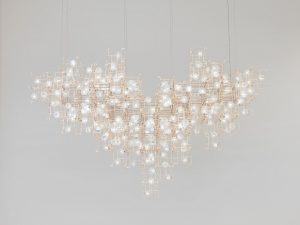 Annie Carlano, senior curator of design and fashion at The Mint Museum, which will host Studio Drift’s first museum exhibition outside of Europe in September, states: “Their explorations of natural and supernatural phenomena take us on an emotional ride from ‘wow’ to ‘wonder’.” – Lonneke Gordijn and Ralph Nauta were interviewed by Helena Horn. (read more in the latest ArtLight issue)

in the Slider:
| Studio Drift | Amplitude | 2017 | Installation at Stedelijk Museum Amsterdam | Photo: Gert Jan van Rooij || The installation is made of 20 large but delicate glass wings that move slowly to suggest a giant bird in flight. The movement in Amplitude is like the pulse that occurs in all living nature. ||

| Studio Drift | Franchise Freedom at Burning Man | 2018 | Photo: Rahi Rezvani || This art performance involves an autonomous flying swarm of hundreds of Intel drones that mimics the flight patterns of a flock of starlings. The performance piece debuted during Art Basel/Design Miami 2017, as a massive crowd looked on, spellbound, from the beach. ||

| Studio Drift | Fragile Future Chandelier | Courtesy of Carpenters Workshop Gallery || Fragile Future : One of Studio Drift’s most iconic works, Fragile Future III fuses nature and technology into a multidisciplinary light sculpture. Each Fragile Future installation is made from hundreds of tiny dandelion seeds that have been hand-glued, seed by seed, onto LED lights and held together by bronze electrical circuits.||