Heinz Mack has created rotating light sculptures, glittering steles, wings, fountains, gleaming golden bronze sculptures, prisms, cubes, moving rotors and Land Art. About a hundred of his works can be found in public spaces. Now he is 90 years old. The Museum Ritter is dedicating a retrospective to Heinz Mack on his birthday. The tour leads from the multifaceted and impressive light experiments in the 1960s to the famous silver reliefs and on to painting and Heinz Mack’s intensive involvement with colour. The exhibition also shows the film Tele-Mack from 1968/69, which won an award at the Venice Biennale.

In 1957 Mack founded the legendary artist group ZERO in Düsseldorf together with Otto Piene, later joined by Günther Uecker. ZERO stood for a new beginning. This was to be taken literally: “After I had occupied myself with painting and sculpture for six semesters and had been very diligent, I discovered in my own way that almost everything in art seemed to have been discovered and creatively exhausted. And I decided to forget everything I had learned and start all over again.” At the time, the young graduates of the Düsseldorf Art Academy were looking for a new path in art to set themselves apart from the prevailing trends of Informel and Tachism of the post-war period. They were intent on thinking of art in a completely new way. Desiring to free themselves from the ballast of the past and open to new materials, the artists’ group ZERO dared a radical new beginning after the Second World War, and they proclaimed it “zero hour” in 1957.

Light was the premise for the development of ZERO: “because we wanted to make new discoveries – and light was one of them,” says Mack. “Light was not simply a condition for art, but all of a sudden we had the idea that even the medium of light could be designed, just as wood, iron, marble or other materials can be designed”.

Kinetic and Sculptural Works Explore the Light in the Sahara

Mack travelled to the Sahara in 1958/59, where he exposed his works to the power of light. Mack wanted to find out whether his works “react to the light like instruments and whether these constructions that I had prepared at home could really play with the light in the desert with its infinitely wide space and with its incredibly intense light radiation, whether they could stand up to the desert. That was an incredibly adventurous investigation and also expected and required a lot of energy and optimism.” Now sand reliefs, cubes, mirrors, wing reliefs, sails, flags and monumental light pillars on the one hand and floating plexiglass objects, light flowers, prismatic pyramids, ice crystals and fire rafts on the other unfolded their enormous impact in the light.

The exhibition shows the Sahara Edition as well as the film Tele-Mack from 1968/69, which won an award at the Venice Biennale, in which the artist experimentally explores pure light in the vastness of the desert. 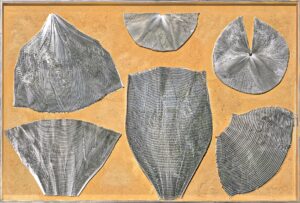 In addition to three-dimensional works made of stainless steel, aluminium, corrugated or acrylic glass, a selection of small marble sculptures is exhibited, which illustrate the great importance of classical sculpture for the artist. Heinz Mack has replaced composition with structure and in that, he is close to the contemporary natural sciences. Finally, Mack’s painting is presented on the basis of recent ink drawings and large canvas paintings. In these so-called chromatic constellations, light manifests itself through subtle colour tones and painted structures that set the surface of the painting vibrating. 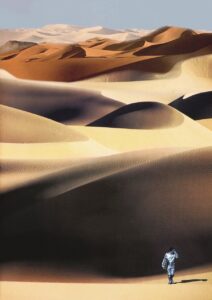