The Light Art Weekend is an annual project organised by ARTE LUCE that aims to combine scientific theories and concepts with international light art at unconventional venues. The first edition in 2018 ‘Extended Mind’ takes its title from the seminal paper published by Andy Clark and David Chalmers in 1998 about the field of extended cognition and externalism. The philosophy stipulates that the mind, the body and the environment can be seen as a whole cognitive system, as such the mind is extended into the world. 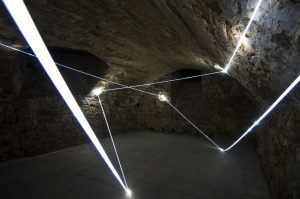 Using this theory as an inspiration for the exhibition translates into a focus on interactive and transcendent artworks using light as the main medium, as well as a range of other perceptual cues such as sound and touch. (Alice Hinrichs)

Article about the exhibition will be published in the next ArtLight issue in November.