In Stendal everything started out with a forgery: supposedly one by Kaiser Heinrich II. A document issued in 1022 in which the village of Steinedal appears under the auspices of St. Michael’s Abbey in Hildesheim, is a forgery from the 12th century. Despite all of that in 1160 the village obtained municipal rights. And in fact, Stendal developed in a splendid manner. In the 13th century wealthy merchants created the Stendaler Seafarers Guild that in the 14th century joined the Hanseatic League; the economy flourished.

The Stendaler Light Days are however no fraud or deception, rather are really taking place this year for the third time. The Stendaler Light Days are an initiative of the H and H Kaschade Foundation. Founded in 1994, the purpose of the foundation is the support of international connections in Stendal as well as the Altmark – primarily in regard to education and culture. 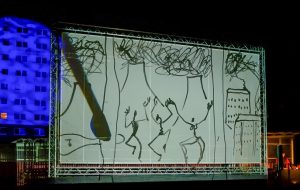 Two of Ingo Wendt’s (*1964, Schorndorf/DE) projection machines are working here. His ‘Ornament Generator’ and his ‘Lichtgemälde’ can be viewed from both in- and outside. Turning elements are provided with colour- and shaded areas and are illuminated much like a kaleidoscope. Thus new colour fields that constantly, but slowly repeat themselves keep appearing. Wendt works with classic light bulbs, lenses, glasses, mirrors and engines – for lovers of classic mechanics, a pure joy. 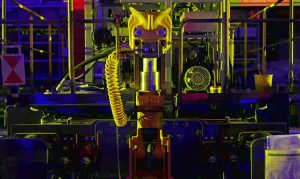 In an extensive projection in the cathedral, the duo Hartung/Trenz plays with Martin Luther’s vocabulary. Since over twenty years Detlef Hartung (*1958, Caracas) and Georg Trenz (*1962, Munic/DE) work with light and are said to be pioneers of medial art. Their projection in the cathedral inscribes words and lines of texts onto the Gothic brick architecture, explores and re-arranges them, causes them to vibrate, dissolves into alphabet characters and textual clouds to come together anew as legible phrases.

Firstly there is Sonja Sofia Yakovleva (*1989, Potsdam) illustrator. With Indian ink she draws surreal worlds of an exceedingly narrative quality onto paper. For the cathedral’s cloister Yakovleva prepares large dimensioned paper silhouettes that throw a highlight onto the time prior to the Reformation: sin, guilt, hell and purgatory are processed in a black-white imagery, intense contrasts create a strong impact. 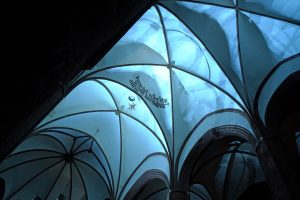 The conceptual world of Reformation and Enlightenment is processed by the Theater der Altmark under the title ‘Du sollst nicht töten’ in a word-space-installation. Actors read passages from the Bible, the Koran or the Buddha lore which they contrast with textual extracts from the Constitution and the Human Rights Convention.

Elvira Chevalier (*1982 Tschuj, Kirghizia) concerns herself with the design idiom of trees. ‘Triangulation 1.0’ is the name of her first piece that, with luminous strings, interprets the bent and lopsided curves of branches in a sober unfamiliar manner. The interconnections create a deep space, yet still allow these to fall back into the flatness. By using special UV- spotlights sensuous images occur.

In her installation with light and video Judith Rautenberg (*1982, Ebersberg/DE) captures the small square panes of gable windows as image points, as pixels. The sensory impulses arouse vague, emotionally active memories. Sounds composed for this venue and occasion are brought into play but it isn’t about music, rather about the space between the tones.

Artistic director of the Light Days is Herbert Cybulska (*1956, Coesfeld). He has worked as a light designer since 1982, in the first place for the stage, since 2006 he also designs light installations worldwide. 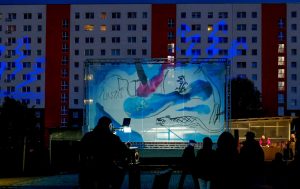