Poetic moments of pausing and reflecting

The light installations create poetic moments of pausing and reflecting in a mostly noisy and hectic city life. In other words, the positions are testimony to a kind of dream space for fantasies that must have their place at all times.

Temporary Light Art in Public Space :: 16 Artists – 16 Positions
On the one hand, public space becomes the setting for new artistic positions – but art also appropriates these urban living environments, transforms them, transforms our perception and our view of familiar places in urban space. In the sense of a reminiscence of the 1st Lichtparcours, the works of art will be positioned next year on the Oker or in areas close to the banks. For centuries, the inner city of Braunschweig has been decisively influenced by the limiting and topographically dominant flood of the Oker River. Thus the Oker and the water play a central role in six positions.

Water – the oceans and the Oker
Benjamin Bergmann makes the annual floods in Venice a topic and points out clearly perceptible connections of geographical and climatic changes. Thus the artist establishes a narrative connection between Braunschweig on der Oker and Venice in the lagoon at the Adriatic Sea. – Sven-Julien Kanclerski also addresses climate change and presents an experimental material research. He traces the formal possibilities of recycling processes and refers to the masses of plastic floating in the oceans. 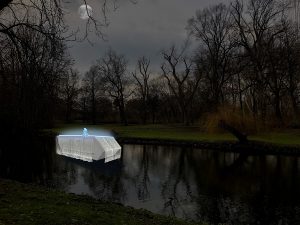 FORT & Anna Jandt sink street lamps “up to their necks” in the Oker. The drama that resonates loses its credibility and transforms into a mysterious and epic scene. Particularly in the nightly interplay of light and reflecting water surface, the initially dystopian impression unfolds into a poetic association.

Joseph Zehrer transmits underwater sounds via a hydrophone in and on the flowing water of the Oker and generates different light signals in light balls. Animals or boat motors activate the light to different degrees and a light symphony of the underwater sound world is created during a summer rain.

Lotte Lindner & Till Steinbrenner project a film onto a large façade. From the edge of the roof, a seemingly flowing river pours out and one sees a woman rowing calmly but persistently against the current. It is a reference to the myth of Sisyphus, whose unproductive work consists of persistently wearing oneself out, but always staying in the same place without ever reaching a goal. But can this not also be an idea of happiness? Visible from afar over the roofs of the city of Braunschweig, the rower becomes the symbol of the person striving for success – without any certainty of success, but happy on her own? – Bjørn Melhus stages a tragicomic scene quite differently and negotiates a form of hedonism. He lets a car that glows colourfully from the inside sink half into the Oker from which the continuous dull techno rhythms sound. What happened here? On the one hand, the installation appears as a kind of memorial that raises the question of who takes responsibility. 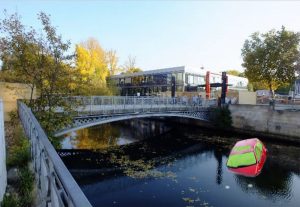 In interaction with topographical conditions
Paul Schwer creates a luminous colour composition whose radiant surfaces as coloured shadows contrast with the surrounding stately architecture of the Herzog Anton Ulrich Museum and the Museum of Photography. – Brigitte Kowanz also uses neon tubes arranged like staircases and radiating white light to mark a coherent space through which visitors can walk and perceive from various angles. Light becomes a means of communication as well as a code. – Anselm Reyle, on the other hand, works with brightly coloured neon tubes. A dome-like 3D information unfolds under a canopy of leaves in the park. The various levels become luminous ornaments whose aesthetic presence is also reflected in the deliberate provocation of the classic cliché and kitsch concept. 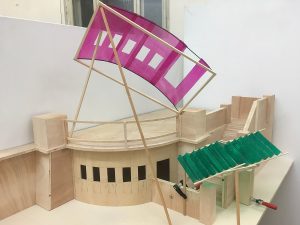 Word and text in light
An approximately 15 metre long lettering by Tim Etchells with the words WINNER, ALL and TAKES in different colours flashes alternately different versions. The temporal and content-related shift intensifies the thought game around the individual words and evokes questions about the WINNER and the prize. And the other side: the loser and his loss of ALL. – TIRED EYES is also a text-based installation with LED scrolling boards and is supposedly arranged as organized chaos. Similar to news feeds, own texts and quotations run simultaneously in different directions and speeds across digital screens. Unsynchronized, the diverse information does not seem to follow a clear narrative strand, but rather functions associatively like digital poems, dialogues and comments on each other.

Under observation – in sleep – in intoxication
Facelift by Heike Mutter & Ulrich Genth is an installation in the park. Pairs of car headlights are free-standing and installed at the same heights as the corresponding vehicles. Like pairs of observing eyes, they react via sensors to moving passers-by, who become part of a light dramaturgy that they themselves cannot know and control. – Johannes Wohnseifer, on the other hand, plays with observing objects while “sleeping”. The image of the lanterns sleeping in the park at night stands in contrast to the usual view of lanterns “resting” during the day and “working” in the dark. – Julian Turner, Andreas Harrer and Florian Pfaffenberger construct a bar architecture that can be used as a social place and pays homage to intoxication. – Nevin Aladağ shows in her installation that public space can also turn out to be a place where more and more private things are negotiated and thus become part of political and social coexistence. – Dafni Barbageorgopoulou produces a series of illuminated bicycles that can be borrowed by visitors to the Lichtparcours 2020. The bicycles are custom-made with abstract formal applications and glow in the dark. By cycling through the urban space the visitors dynamise the evening cityscape. 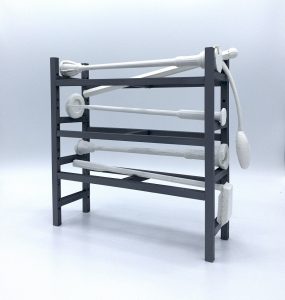 What can we expect?
The 16 positions can hardly be summarised in their diversity. Nevertheless, it becomes clear that neglected urban spaces as well as small natural landscapes, bridges or waters, construction sites, brownfields and architectural ensembles can be highly inspiring. In reception we can always expect an ambivalent play of poetic beauty or threatening discomfort. Some installations respond with a very special absurd comedy in which the fragmentary, destructive and confusing plays a central role. Some works come across as light and playful, only to trigger a certain instability in the reception in the further confrontation. The result is a bizarre atmosphere in which styles are mixed and codes shifted.

The drafts are presented
The model exhibition of the upcoming Lichtparcours presents sketches, models, film studies and related works of the project projects. The planned artistic working process will also be revealed.

You want to support the Lichtparcours 2020?

All donations are directed in full into the realisation of the art works. 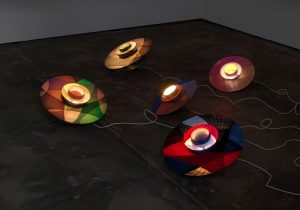