The art of language on light bands

Holzer has conquered public space worldwide with her “Truisms” of light, her almost lapidary but critical statements on politics, economy and life. – Holzer sees herself as a political artist. She became enthusiastic about computer technology early on and since she first used LED technology in 1982 to make her texts public, light has become the main medium of her art. From then on, she could have her messages trickled down in huge LED writing strips or monumentally illuminated the silhouettes of cities all over the world. “I became addicted to electronics,” says Holzer about her attraction to working with LEDs. “I just like to look at them and let them do tricks.”

When asked how she came to light, Jenny Holzer explains: “At first I started with street posters because they were available to me and seemed to make sense for the sentences I wrote. After doing this anonymously for a few years, I had the chance, almost by chance, to put something up on the big facade in Times Square. So I had to think about what it meant to change from a rather subversive underground medium, the poster, to an official medium. LED is usually used for advertising or news and I wanted the work to take up space. I wanted this work to be more sculptural, to have a strong physical presence! – Holzer suddenly became famous when she ran her texts on the huge Spectacolor screen in New York’s Times Square in 1982.

In this technique, most of her projects in public are temporary, glowing for only a few days or weeks, then the LEDs go out again. Temporality and transience are part of her program, as is the desire to attract people’s attention and make them think about what she has written. 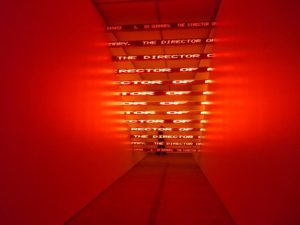