Phenomena of light, space and movement

Light, space and movement are the focus of Dieter Jung’s artistic work (* 1941, Bad Wildungen/DE). Since the mid-1960s he has been exploring the pictorial effects of color and light, plane and space. In order to visualize the fleeting moment of optical phenomena, Dieter Jung uses both analogue and digital techniques, especially in holography. Paintings, drawings, holograms, as well as the installations “TransOptics” and “Strings” show the phenomena of light, space and movement, which seem to be in constant dialogue with each other and almost elusive as immaterial apparition.

Interview with Dieter Jung in ArtLight_february 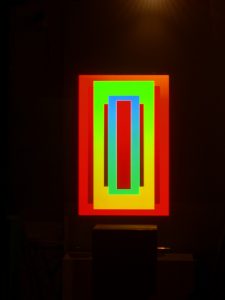